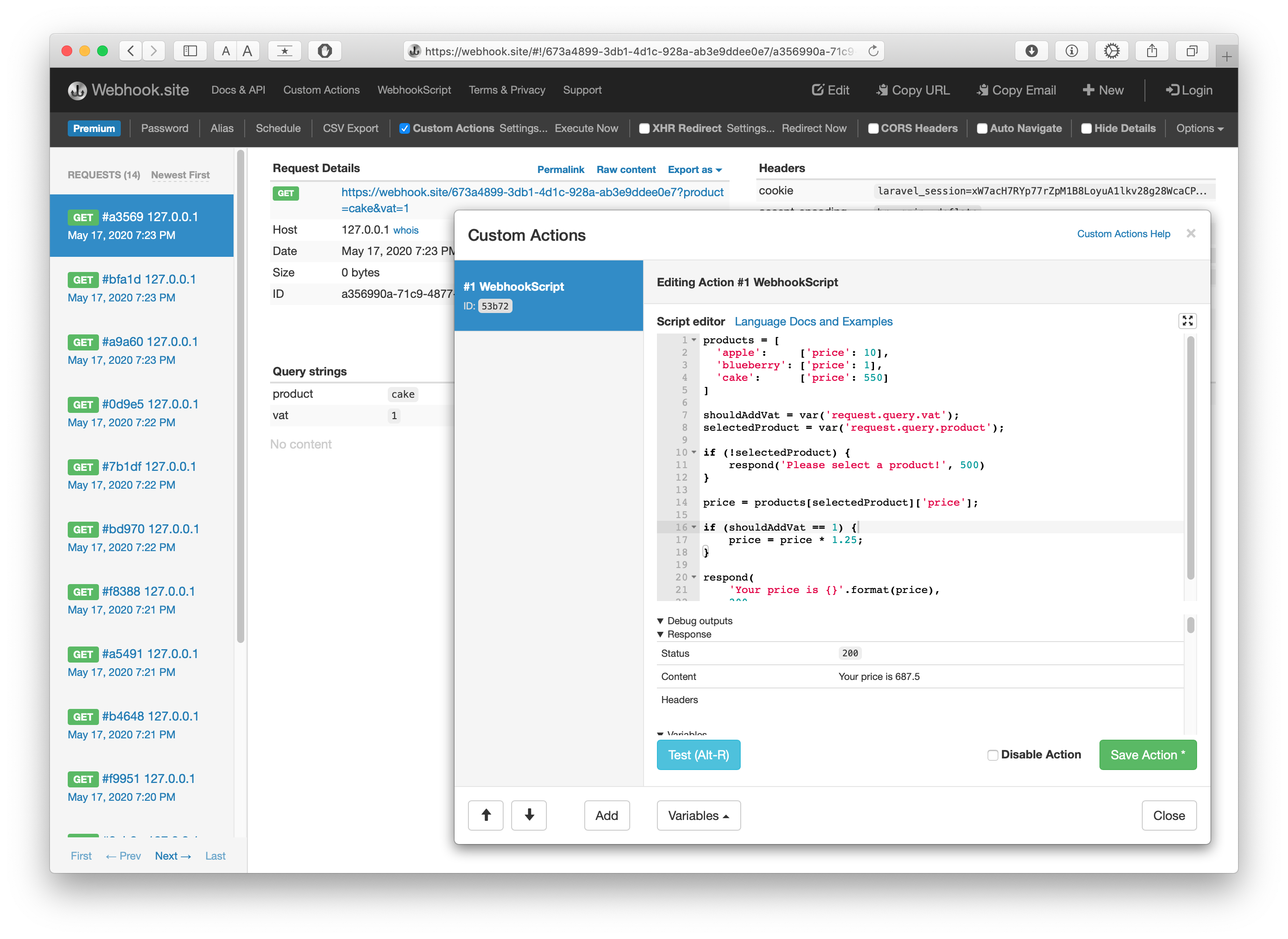 This action runs a JSONPath query on the contents of a request. With it, you can extract any data from a JSON document and store it in a variable, which can then be used in a downstream action.

JSONPath is very similar to the jq commandline utility.

For more details on what's possible with JSONPath, take a look at the docs.

As you start entering a JSONPath, the results are validated and shown next to the input field.

This action runs a Regex (regular expression) query on the contents of a request. With it, you can extract any data from a text document and store it in a variable, which can then be used in a downstream action.

As you start entering a Regex, the results are validated and shown next to the input field.

Similar to the Extract JSONPath Custom Action, Extract XPath lets you extract values from an XML or HTML document and save the result as a variable.

The following examples are based on this XML document:

An action that allows replacing multiple inputs to a string with specified replacements. Additionally, Webhook.site will replace all variables in the source text as well as the text being replaced, and the replacement.

This will send a request with variable contents from the Webhook.site cloud. Per default, the request contents will be identical to what was sent to the URL originally.

Variables extracted previously can be used.

The response of the request is stored in a series of variable names prefixed with a value of your choosing. The following variables are set after the request has been fired:

This will send a email with variable contents from the Webhook.site cloud. Variables extracted previously can be used.

Allows you to run one or more SSH command on a server. Webhook.site captures the output (stdout), stderr and the command exit code as Variables that can be used in downstream actions:

Allows uploading a file to a FTP or FTPS (FTP with TLS/SSL) server, specifying a hostname, port, username, password, relative path to the file, whether to use SSL and whether to use passive mode. Finally, the file content can be specified, in which Variables are replaced.

We recommend storing the password as a Global Variable.

Allows running a database query, with support for fetching out data in a series of variables. We recommend storing the password as a Global Variable.

When using e.g. INSERT or UPDATE statements, we strongly recommend using parameters for each column value. Doing this, you avoid SQL injection attacks and other issues when using user-submitted data (e.g. via Variables), or even just data containing special characters like quotes, that could otherwise break a query.

Each parameter name should start with a colon (:) and be a single word. You can then reference these parameters inside the query, like in the following example: 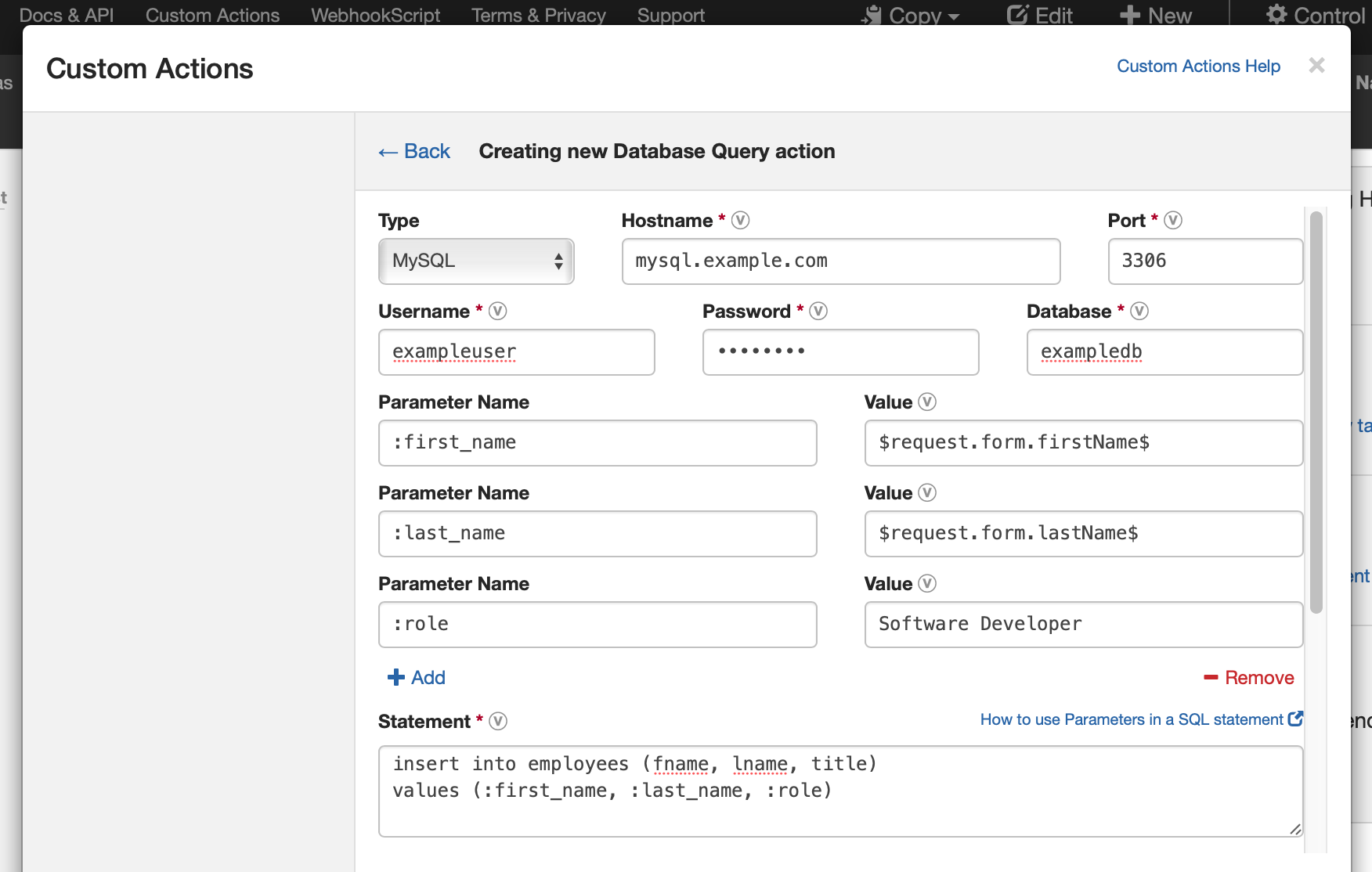 When fetching data using e.g. SELECT statements, Webhook.site automatically inserts data in a series of Custom Action Variables, which are then available to downstream actions.

For example, when fetching rows from the following table:

If the variable name prefix would be set to output, the following variables would be created containing specific values:

Additionally, a variable would be created with the name $output.json$ containing the data in JSON format:

This action can be used to modify the response of the Webhook.site URL based on the input.

If the IP is rate limited, the URL will respond with a HTTP 429, action execution is stopped, and the request is not saved in Webhook.site.

Marks the request so it is not saved in Webhook.site, which is useful when receiving a large amount of requests.

Useful if you need to validate that the request does or does not conform to certain criteria, the Condition action will either stop or continue based on a condition.

In both the input and the value fields, variables will be replaced (including Global Variables from the Control Panel), so you can compare e.g. JSONPath or Regex values - or even values from a previous HTTP request that was sent.

The following "operators" are available:

The "result" of the condition will be logged below the request details, so you can see what happened.

Takes an image from either a URL or raw image data from e.g. a file upload, email attachment, request response or another action such as Dropbox.

You can enter both width and height to contrain the image in both dimensions, or enter a single dimension.

Check "Keep Aspect Ratio" so that the image keeps the aspect ratio, but doesn't exceed the height and width constraints.

To start, you need to make sure that you have connected a Google account in the Control Panel, available here.

After that, you can select the account in the dropdown when creating the Custom Action.

It is important to note that Google will block Write requests (i.e. adding or updating rows) at 60 requests per minute. After that, the action will temporarilyfail with the following error message:

Therefore, for importing mass amounts of data in a short timespan, Google Sheets is not recommended. Instead, we recommend using the Database Query action.

All actions must specify a range, which behaves similar in all actions. For the Add Row action, Google Sheets will automatically find a "table" (e.g. a homogenous mass of data) and add the values at the bottom.

A range is the same query as in Google Sheets, e.g. to select A1-C3 in Worksheet "Example", enter 'Example'!A1:C3.

When inserting or updating values, you can either enter a value in the text field, or supply multiple cells and/or rows using JSON. To insert two rows, the JSON would be ["cell 1", "cell 2"].

The Get Values Action allows you to define variables based on the output. Since this action can return multiple pieces of data, multiple variables are created.

For example, if you select two columns and two rows, e.g. A1:B2, four variables would be defined:

Additionally, the data is available in JSON, with the variable_name.json variable being defined, and continuing with the example above, would contain the following JSON:

The following actions are available for AWS S3:

In addition to the "official" Amazon endpoints, Webhook.site also supports S3-compatible storages like DigitalOcean, MinIO, Wasabi and more. The endpoint can be specified when setting up the account in Control Panel.

The "Create Invalidation" action allows you to dynamically create a CloudFront cache invalidation as a Custom Action. Both the Distribution ID and the paths to be invalidated are replaced with Webhook.site Variables.

With the Discord Custom Action, you can send messages to a specified channel (Each bot account uses a specific channel, so you can connect more accounts to send to different channels or servers.) In addition, you can choose a custom username and avatar image for the bot user. 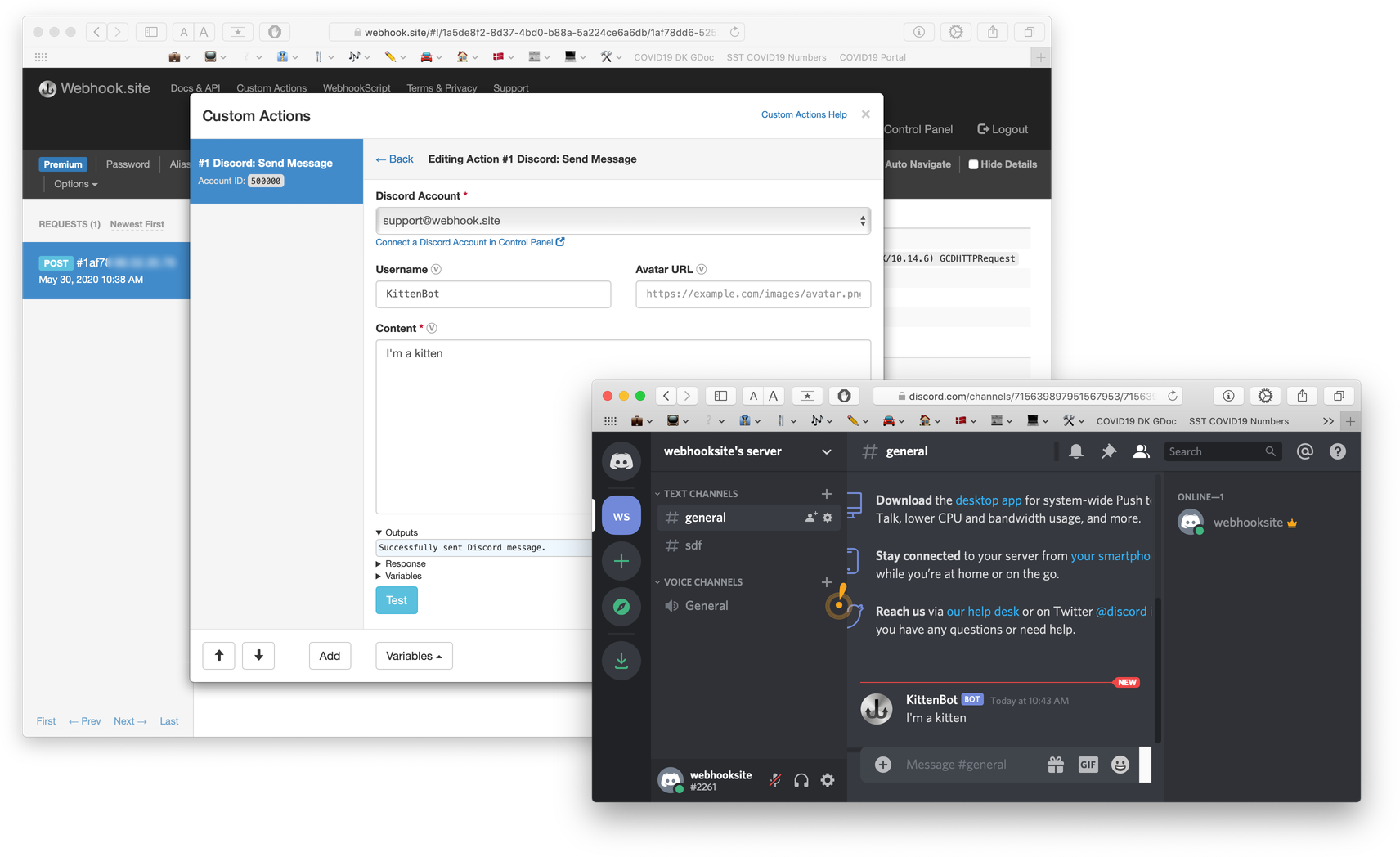 With the Slack Custom Action, you can easily use Slack's Webhook URLs to send messages to a channel.

The Dropbox integration has access to the entire contents of your dropbox, and currently the following actions are available:

The RabbitMQ Integration allows you to publish and consume messages from a RabbitMQ queue by specifying the server connection details.